We are going on a brief trip through various garden growing mediums bedding options. You can research the items below and find more detailed explanations of the different discussion items on the web.

Loam in subsoil receives various minerals and amounts of clay by leaching (percolation) from the topsoil above. Soil is heavy to move,  requires amendments such as fertilizers, peat moss, mulch, and vermiculite.

Alfalfa, Straw, and Compost are essential elements of my growing medium. Below is information about My Three Sisters and the value each Sister brings to the garden. When joined together and digested using bacteria, you create Humus.  Once in the Humus state, you will instinctively know what great growing medium is from the smell, texture, water retention.

Used as a soil amendment, Alfalfa has ranges of N 2.0-2.5%, P .5-1.0%, K 1.%. It is a source of protein and carbohydrates that encourage microbial action in the soil. Alfalfa is an all-purpose, slow-release fertilizer. It also generates heat when decomposing.

Alfalfa also has an essential ingredient in triacontanol, a potent plant growth regulator. Too much of a good thing can cause damage to your soil and plants. Alfalfa can help balance this action.

Using Alfalfa adds nitrogen, phosphorus, and is a beneficial insect food. As the Alfalfa decomposition, it generates heat. The heat allows for early planting and late-season crop production. What else could you do you want?

Straw as a soil amendment 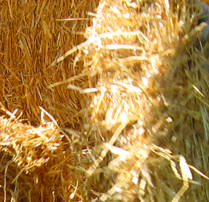 Straw’s ability to hold moisture, up to 270 pounds of water per bale, and breaks down into organic plant food. Straw does not contain vital nutrients but provides oxygen and carbon to plant roots.

There are many examples of using straw as a garden material. Use straw as an insulating cover for plants in cold climates to protect plants during the winter. Straw combined with manure helps keep nitrogen.

Compost as a soil amendment

The upside to compost is it retains water, provides nutrients, cools the soil surface, and prevents soil crusting, thereby allowing water to be absorbed in the soil more easily.

The downside to compost is that it may contain insects’ larvae, weed seed, and green manure if not processed correctly. If the mulch smells like vinegar, ammonia, sulfur, or silage, don’t use it. That indicates the mulch was not handled correctly and is anaerobic. Test your mulch with an acid tester. Toxic mulch will have a ph of 1.8 to 2.5.

With compost, you can have fungus problems too. The shotgun or artillery fungus (Sphaerobolus) may cause serious issues. The fungus shoots spores into the air, and they may drift into your home, autos, etc. Fungi spores will resemble tar spots, and they will damage painted surfaces.

Slime molds are another fungus nuisance. The slime molds produce toadstools or mushrooms. If you are not 100% sure what kind of mushrooms and fungi they are, remove and dispose of all in your raised bed.

Humus as a soil

Humus is a nonliving, finely divided organic matter in the soil derived from microbial decomposition of plant and animal substances. The color range for Humus is from brown to black. Carbon is the primary part of the Humus. Other nutrients are nitrogen and smaller amounts of phosphorus and sulfur.

As organic matter decomposes, its components are broken down by microorganisms into forms usable by plants. Humus ranking is how well it is blended into the mineral soil, the types of organisms involved in its decomposition, and the vegetation origins.

The ideal growing medium I have found is Humus. Plant roots grow faster and easier in the humus compared to earth. The wonderful thing about our process is that humus is the by-product of the raised bed process.